“This girl is on fire!” (to be sang like Alicia Keys)

On my way from Asia back to the United States, I made a pit stop in Japan for some family time and to also gather the rest of my belongings. My dear cousin Brandon, who is stationed in the Navy there, let me stash some bags there until my return. Thanks pal!

Most of my previous experiences in this unique country you can read about in other posts. Some of the popular ones are “You know you’re in Japan when…” and Buddha, when we went to visit the 2nd largest Buddha statue in Japan.
For this one, I’m going to wrap up a few random events that leaves me still smiling about a country I wouldn’t want to live in, but don’t want to live without.

First up is my welcome back buffet. It’s becoming tradition that with each visit, we choose a night in which we hit the local store, grab several random items that look good and/or questionable. Here’s a snap shot from last years spread in “Snacks, Japan style”.

This year we did just fine after wandering the aisles with confusing character writing and giggling store clerks. If you’ve ever been here, you can vouch that a grumpy employee of any customer service industry is rarely seen. They are typically overly eager to help you and smile while they chant something in Japanese (that I still don’t understand). No matter what mood you walk in with, you generally leave feeling the uncontrollable urge to skip to your car. Back to the snacks…here’s our dinner!

Fun fact: In Japan, “Sunday Funday Football” starts extremely early on Monday morning. I thought I’d give it try and see if any of the local channels would air it. To my surprise there were some enthusiastic hosts describing the highlights!

For the halftime show, women’s bowling! How do you not smile when you see this? 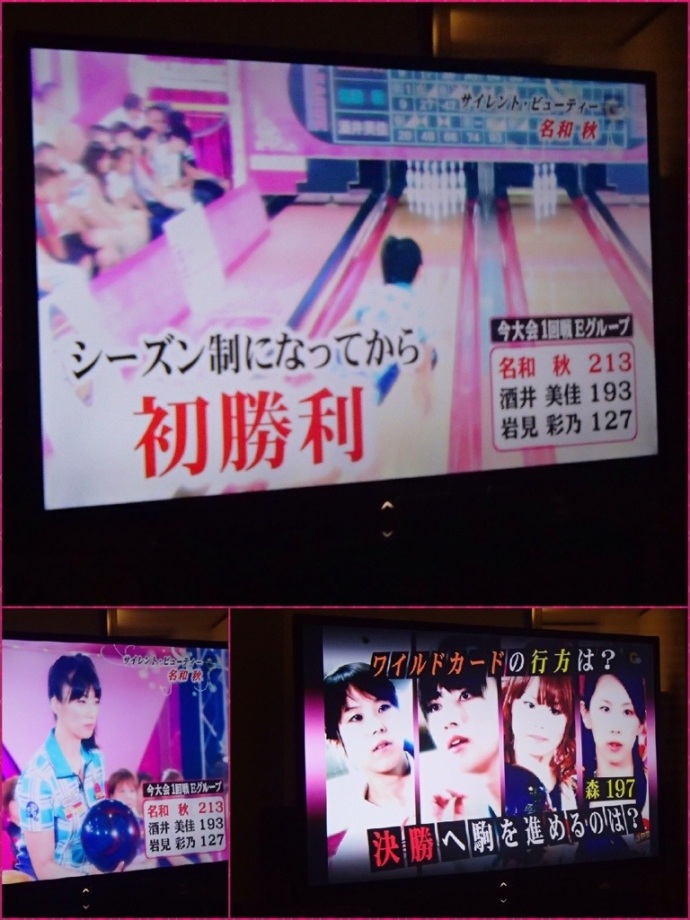 Ok, let’s move on to a night out on the town where I get to introduce a new friend. Originally from California, Craigg is also serving in the Navy at the same base as Brandon. Don’t let his easy going attitude fool you, this relaxed guy not only has an abundance of energy, but a sharp witted sense of humor to match. These two boys in the same room will leave your cheeks aching and mind stimulated (and probably slightly confused). 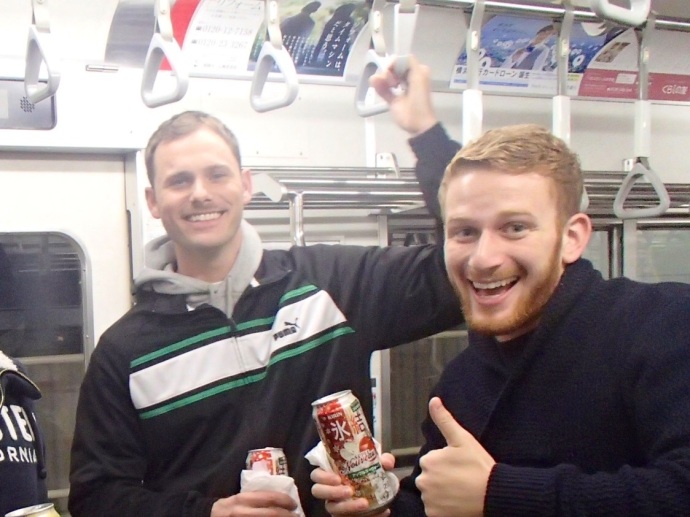 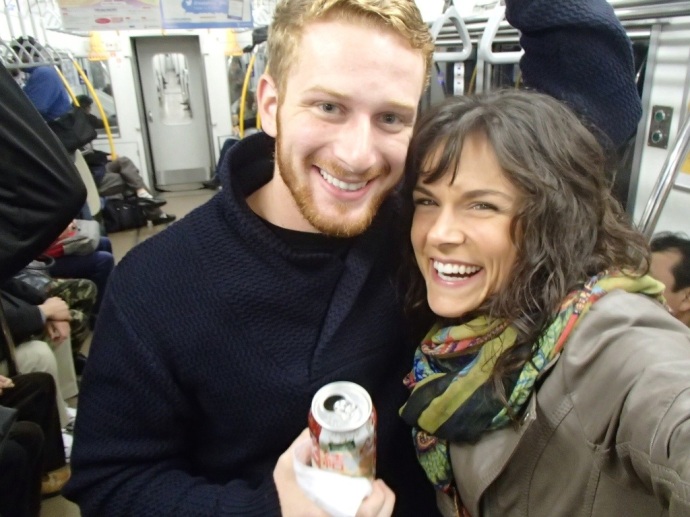 After our train ride to the city, we laughed the evening away while making random pit stops in the vibrant streets. On this handstand shot, I was more impressed that Brandon captured it on the first try over the fact that my feet didn’t come in contact with any innocent bystanders. For more detail of this specific area, check out the post called “Wait, it’s not Halloween yet…is it?” 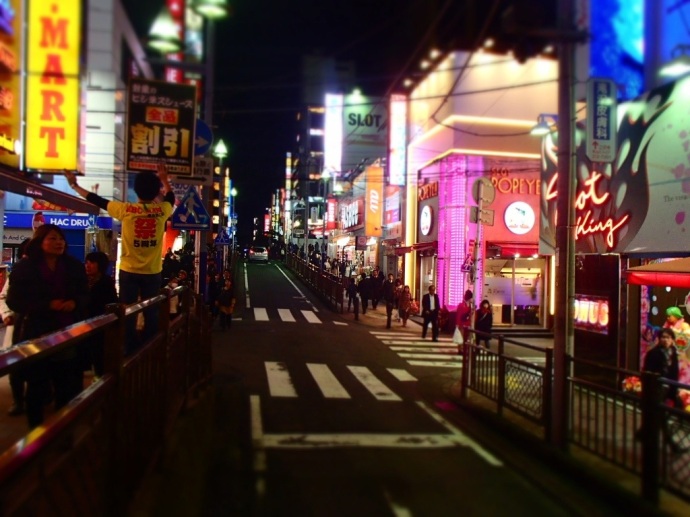 The next and final event was a extraordinary surprise from my moms dear friend Rome. To this day my mom still speaks of the fond memories she created while working with him. On this day, I was lucky enough to be treated like royalty at an Alicia Keys concert right here in Yokohama!

Me and Rome before the show.

My date to this international opportunity? Only the perfect partner in small crime, Craigg! We had no idea where the seats were, so we just handed the Japanese written card to the guard and followed their finger pointing directions. A few security men later we were finally led to a roped off area on the floor. What? No way! We were in prime seats, three rows from the stage! 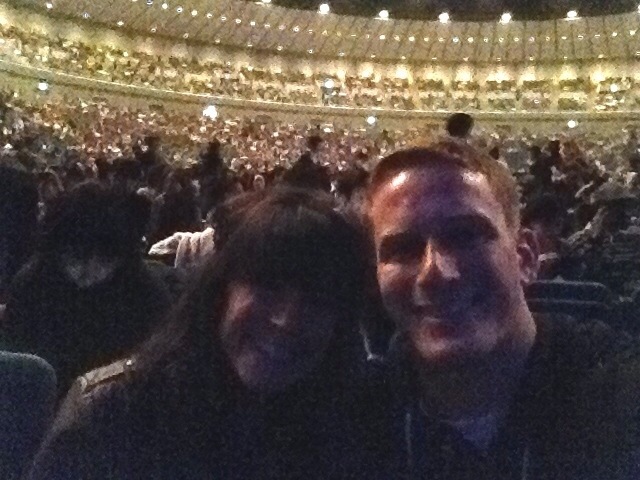 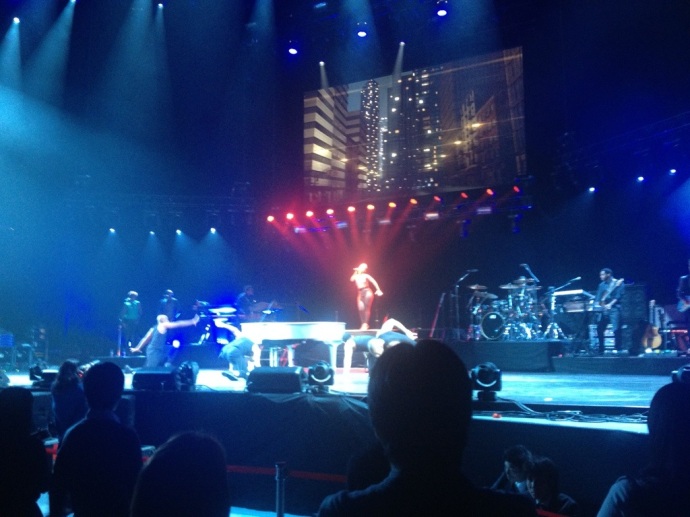 These employees were clearly not enjoying the show. 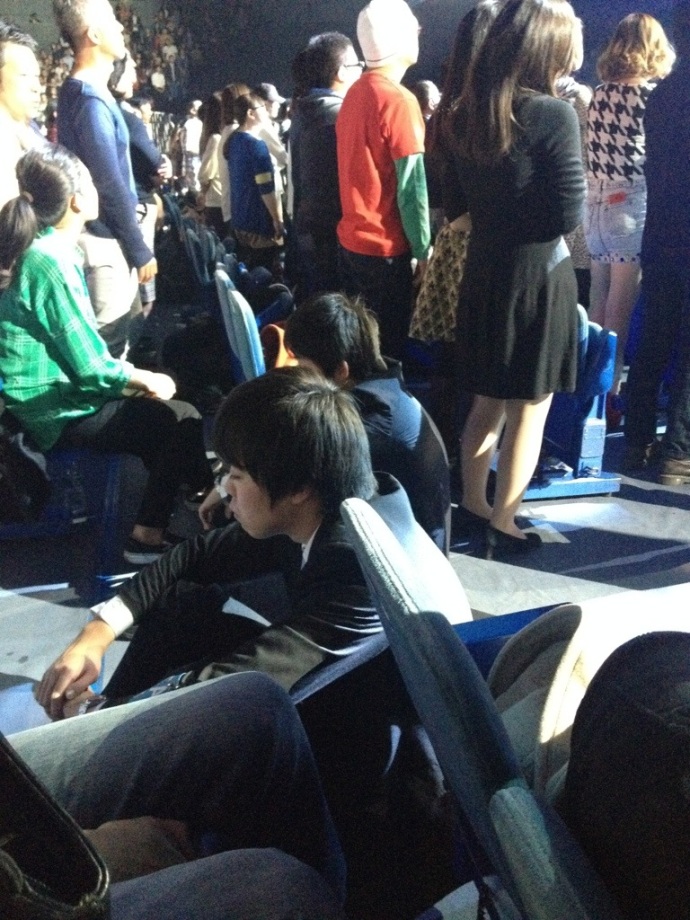 …but I was! “Everybody put your phones in the air!” (For those of you under 20 years old, this used to be an arena full of lighters in the sky). 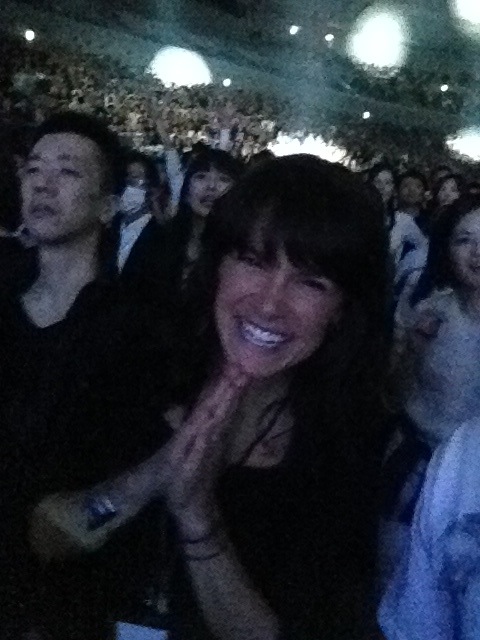 *Thank you Craigg for bringing your phone to get the pictures from above!

After the show, we dodged the ropes and shined our V.I.P passes to get backstage. What do you find behind then scenes when the curtain drops? Exhausted musicians, random snacks, a variety of drinks and a bundle of hard working crew members. For obvious reasons he didn’t snap any photos in this area.

Rome, you’ve raised the bar once again. Many thanks and warm hugs!

The “I think it’s still moving” kind of sushi

Yakiniku (sounds like yah-key-nee-koo) is a term which refers to “grilled meat” and was originally named for the Japanese interpretation of the Korean bbq. While it’s not as trendy as Sushi or Ramen, you can find several different restaurants specializing in this entertaining meal. Last year in Japan we happen to find one of the best in town… Flash back time!

This year we gathered some friends to try out a new stop up the road that seemed to be popular with the locals. A small problem, if you want to call it that, due to the lack of tourist in this area, the menu is only in Japanese. You’d think the pictures would be helpful… right? 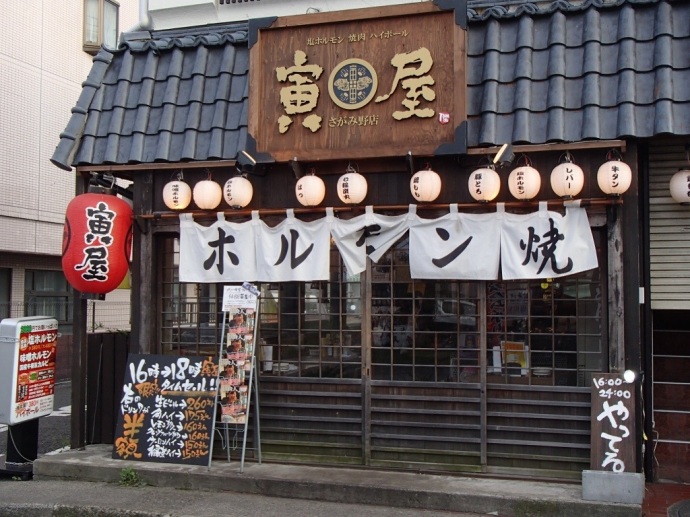 To my left, Brandon and Jessica ordered what they thought was chicken and beef. What came out? Blubber and liver.

To my right, Kennedy and Lechich (navy friends aka- shipmates) ordered a thick cubed bacon. What came out? Layers of fat dividing red meat.

For my order, I played it unusually safe with fresh green Cabbage. 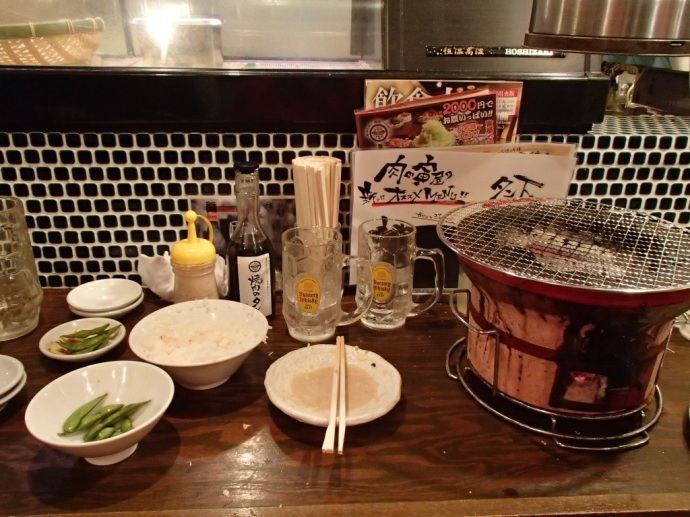 The total for four adults not including a few alcoholic beverages averaged about $18 person. My favorite part was the appropriate gum that came with the bill!

Next up we have a noodle based soup that was originally imported from China in the Meiji Period. In more recent decades, it has become a very favored dish in Japan. There’s a variety of options from soba, ramen to udon with flavors including but not limited to shio shoyu, miso, butter, reimen or hiyashi chuka. These meals range from $4-8 dollars depending on the size and quality. I haven’t had any this trip, but here’s a glance from a previous visit.

Time for my favorite… Sushi! Though we use the word “sushi” to refer to all of the scrumptious stuff that’s delivered on a wooden board, the word “sushi” actually refers to the sweet, vinegar rice. If you want more information describing in full detail the variety of combinations that grace the table for this meal, please google it.

For now, just know that it usually involves raw or seared fish, rice, sea vegetables, sauces and soy to create a beautiful mixture of flavors that pleasantly greet your taste buds. In other words, its simply delicious.

For our sushi experience, we got a group together at a local spot. This place has pictures on a huge menu, floating appetizers circling the bar and a very friendly staff.

After starting off with a warm hand towel, everyone continued by creating their own hot green tea. You put in the amount of powder desired, then use the fresh water spout to add blistering hot water. 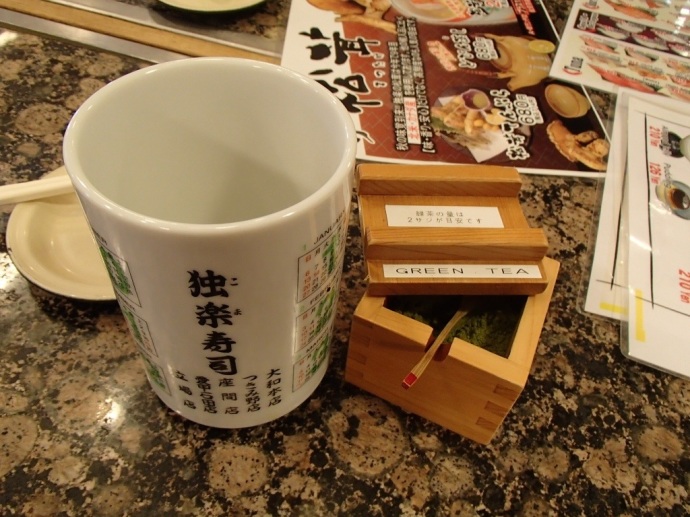 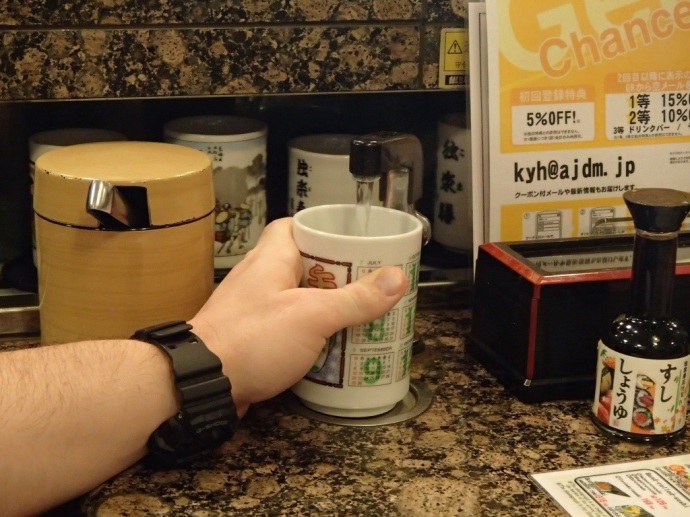 We ordered a variety of fish to share around the table. From glazed salmon to garlic tuna and of course a few other pieces that we couldn’t figure out. 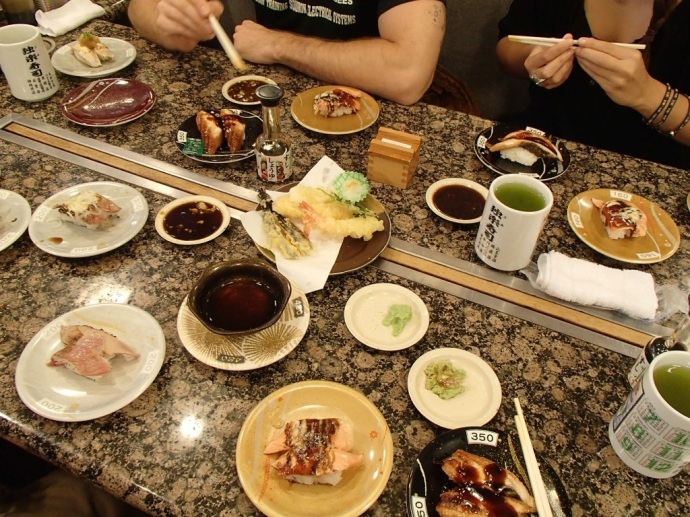 Next up, a gift from the waitress with a small cup of “surprise soup”. Awkward faces prepare for the first bite and although we still don’t know exactly what it contained, the taste wasn’t bad. 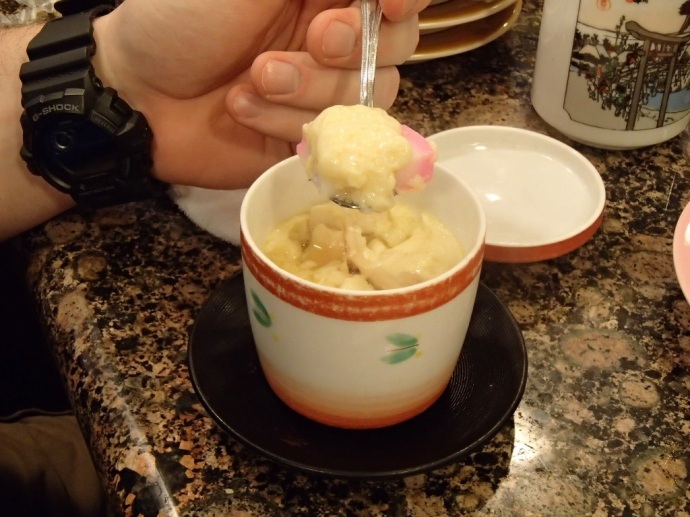 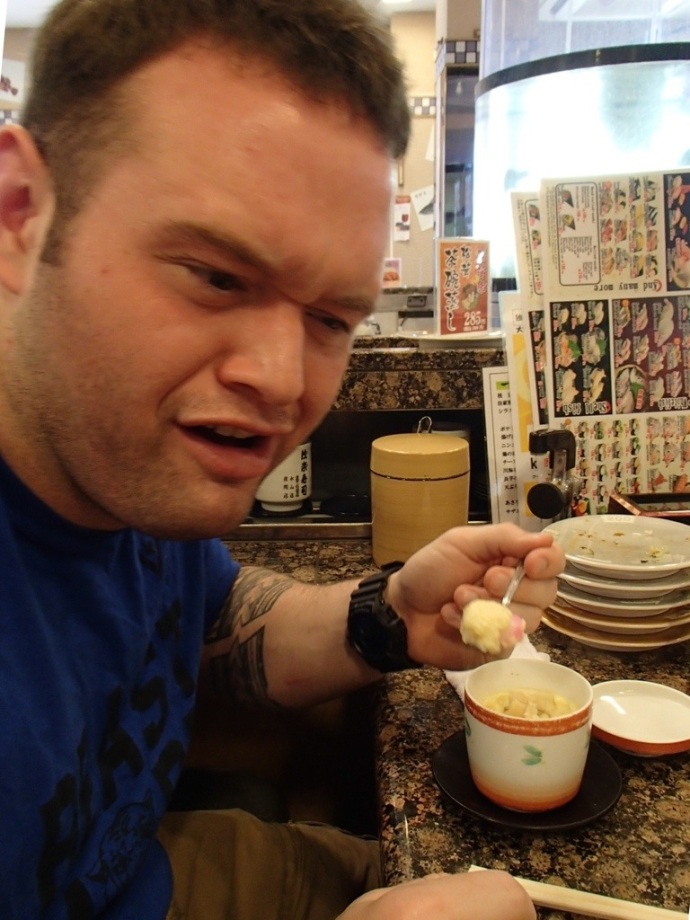 Since we’re on the note of mystery dishes, I saw that there was okra in some of the options… I love okra! We asked for “the best one” and out came a dish Gunkanmaki style with okra and what smelled like dirty socks dipped in expired peanut butter. Not my favorite. 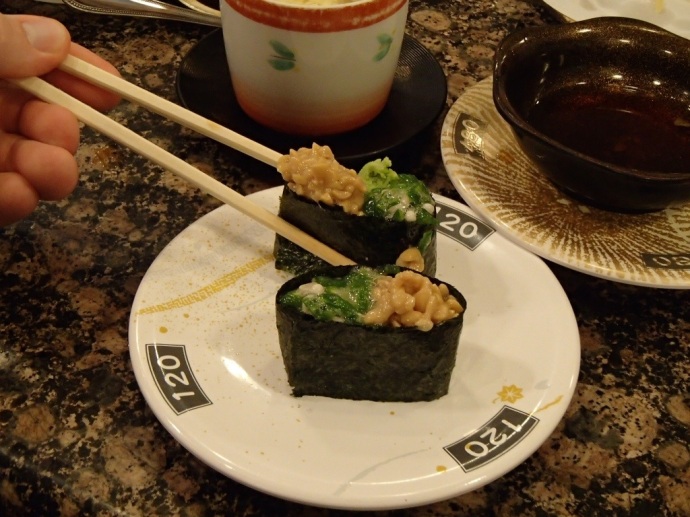 For the grand finale, they treated us with their fresh fish specialty. It goes from swimming (literally) to your plate in less than 5 minutes! Once ordered, we watched them pull it straight from the tank to start the process!

They then “prepared it” by putting the raw meat on a small bed of rice (extremely tasty) and then serving the head and bones deep fried. The texture resembled an extra crunchy potato chip with a subtle fish flavoring. It was amazing!

Although ice cream, mochi and other desserts were offered, we went with a fresh fruit jello dish.

Total for this spread stayed under $13 a person! On the way out, there’s what appeared to be a colorful candy machine. Nope, it dispenses toys and puzzle games!

I chose to walk home for slight relief of my full tummy, which really only meant room for a new treat that I happen to see at a local mini mart! A green tea popsicle that hugged a sweet bean paste. I will say that although this is a “healthier option”, it’s not the best choice if you’re craving a good ol’ ice cream cone.