I’ve “Prost” through Oktoberfest in Germany, beaded my way through Mardi GRAS in New Orleans, danced through Kadooment in Barbados, spent Australia day in Sydeny, and dressed up at the Sevens Tournament in New Zealand… Now what?

Welcome to one of the largest food fights in the world. A battle where more than one hundred metric tons of over-ripe tomatoes are thrown in the streets at tens of thousands of participants.

At around 11 a .m., the first event begins. A ham is placed on top of a cockaigne pole (a large, greased pole), and the tomato fight can begin only when someone is able to climb up and bring it down. People struggle against the huddle while climbing on top of one another. This is necessary in order to be “the one” to pull down the chunk of pork. With this victory (that I’m sure is claimed till the following year) a loud shot is fired from a cannon and the tomato-throwing begins.

After exactly one hour of chaos, a second shot sounds and all throwing stops and turns directly into a dance party in the streets!

Just a reminder, I’m with Ian and Bevan. Ian is my long time friend from Folsom California who randomly jumps in and out of my journey around the world. Argentina is where we last met the pleasantly crazy (I mean that with love) Australian, Bevan!

To reach the small town of Buñol the beginning of the festival it was necessary to catch one of the first trains out of Valencia.

Here we are before the crack of dawn patiently waiting at our bus stop.
Banana… Check.
Beer…. Check.
Goggles… Check. 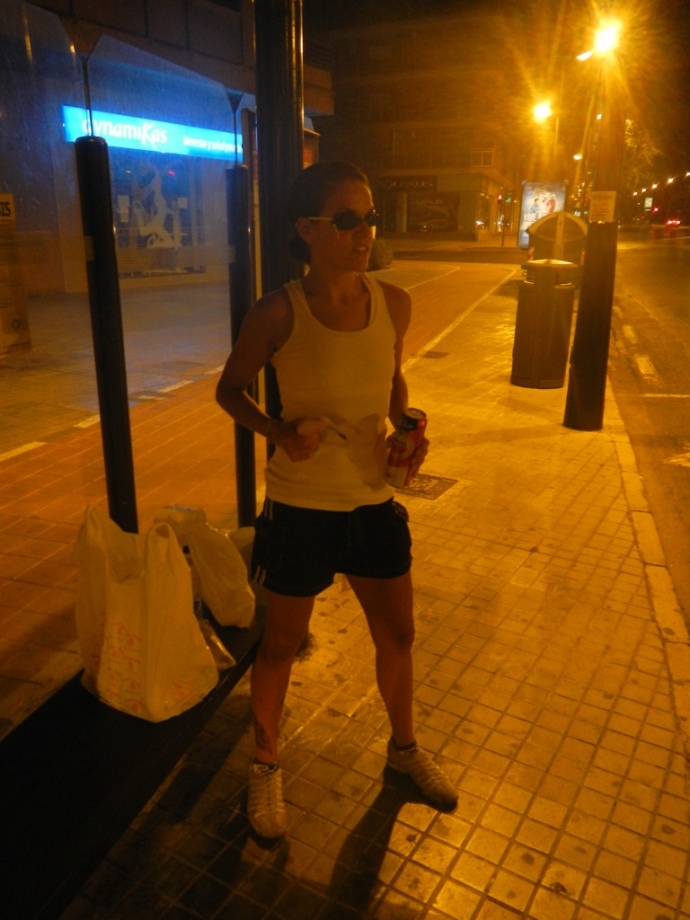 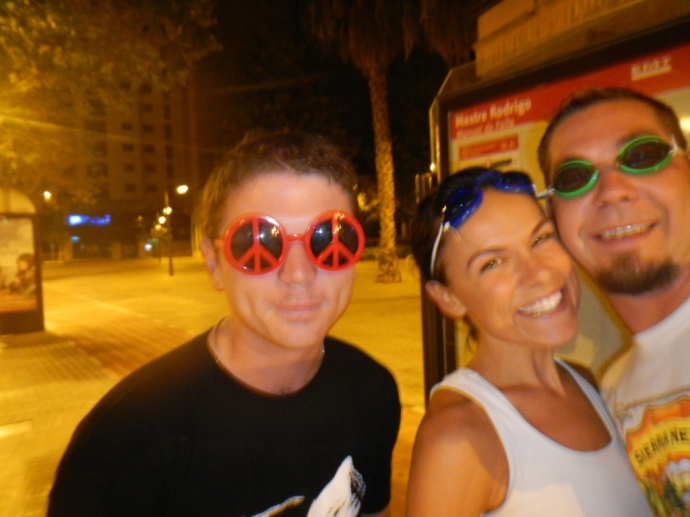 Once you arrive you see food and drink vendors with hundreds of eager adults dressed in whatever the day calls for. In this case, clean clothes (to start with), protective goggles and shoes you plan on dumping in the garbage directly exiting the venue. Most of them have a beer in hand, a slight skip in their step and a smile that says “ooh pick me, pick me!”

Notice how clean we all are in the start of the walk towards the central of the fight. 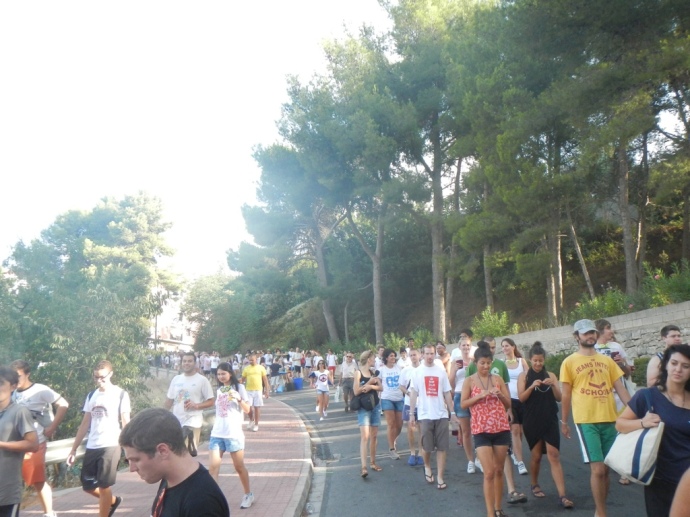 We’re getting closer so we figure now is the time to fuel up for the day ahead. The boys make a pit stop for some pork in buns (I’m sure they would describe this meal with much more enthusiasm). Judging from my face at their kind offer for me to try some… I went for the tuna sandwich that, to my delight, came with fresh green olives and a Spanish hot pepper! Of course all of the above is nicely complimented with the local beer. 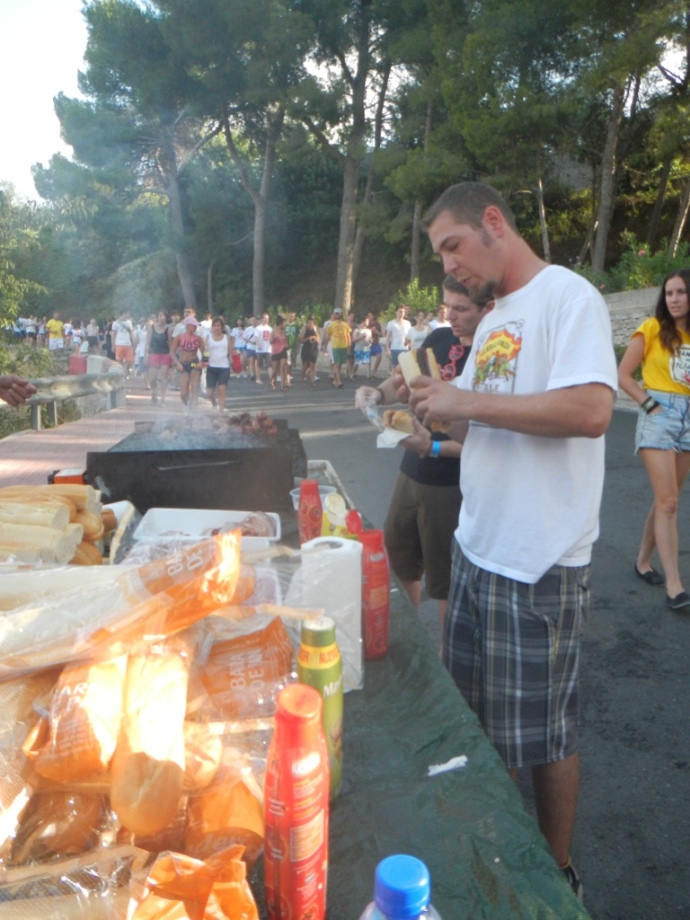 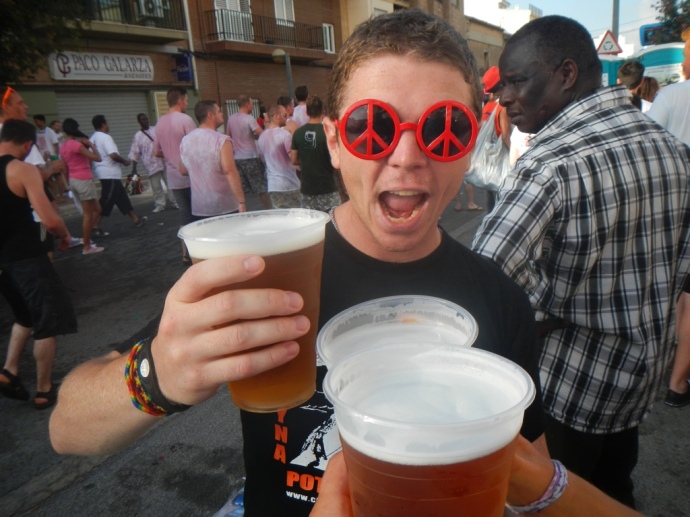 As we continue to march towards the center, the crowd grows to a massive sea of some of the biggest kids I’ve seen. Not one tomato will be thrown until the fire of the first cannon. This means we all mob to squish as close as we can to the road where the trucks will launch from. 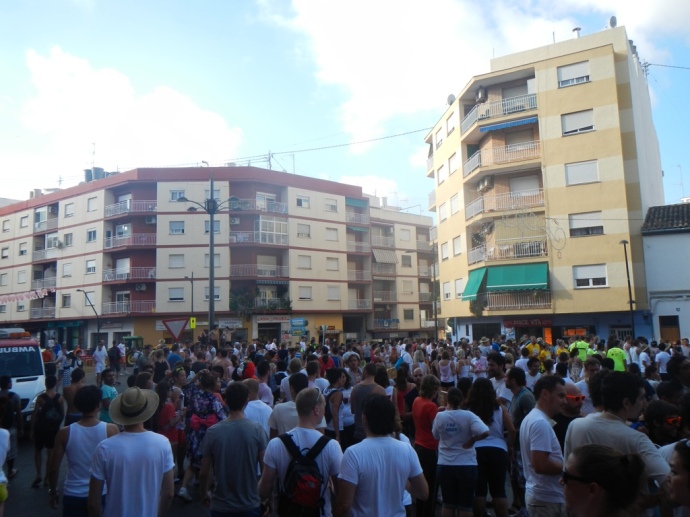 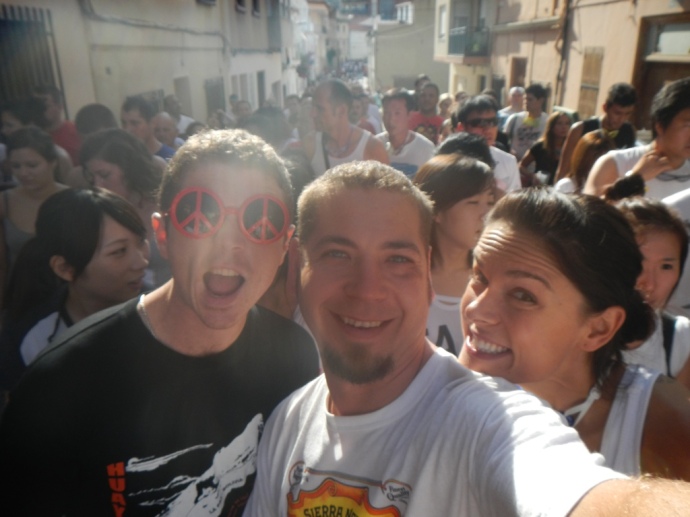 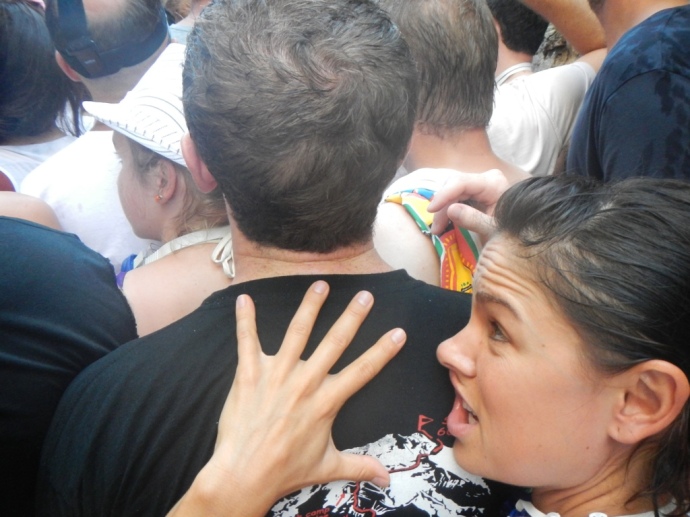 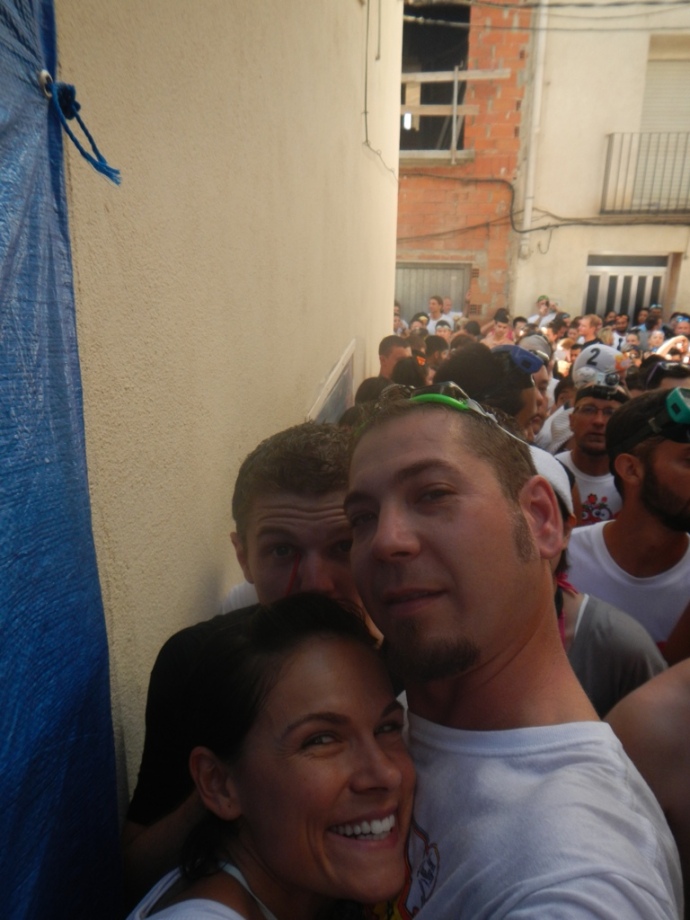 As soon as the cannon sounds with a large puff of grey smoke in the air, the people go crazy!

It made me giggle because we were so far back, that when it fired the crowd went nuts and nothing happened for awhile. It was like the lights going off for your favorite band to come on stage and you scream… then shout and jump… and wait…. and yell again… and wait. Then you all kind of look around… and wait some more until finally, show time!

This is where I would normally insert dozens of photos of the real life action. However due to the fact that we only brought Ian’s camera and it was so mashed that you literally couldn’t move your arms unless you got aggressive, we only captured the before and after.

So, here is the walk back towards the train. Imagine dance music being drowned out by the sound of voices, these of which you can barely understand because they’re either really intoxicated or from another country… or both for that matter. The smell of acidic sauce sizzling in the sun with spilt beer flooding the streets. The sweaty liquid keeps the lost articles of clothing afloat as it all drifts down the road towards the center. 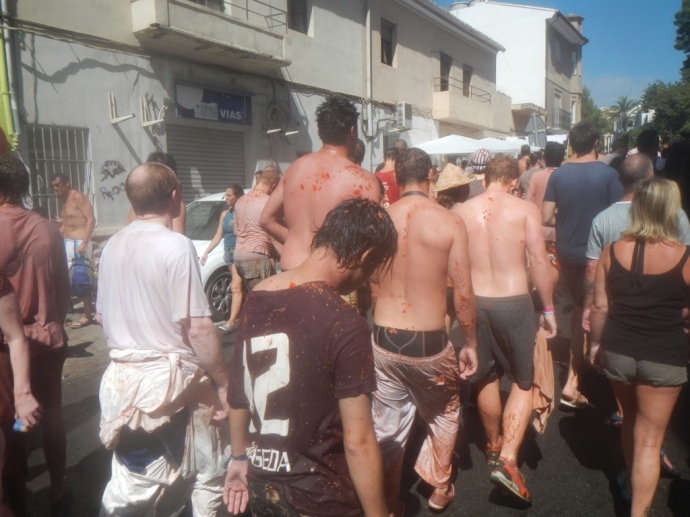 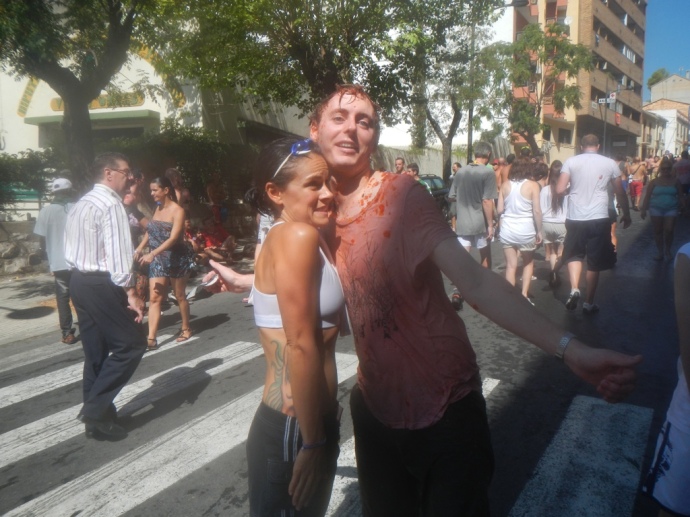 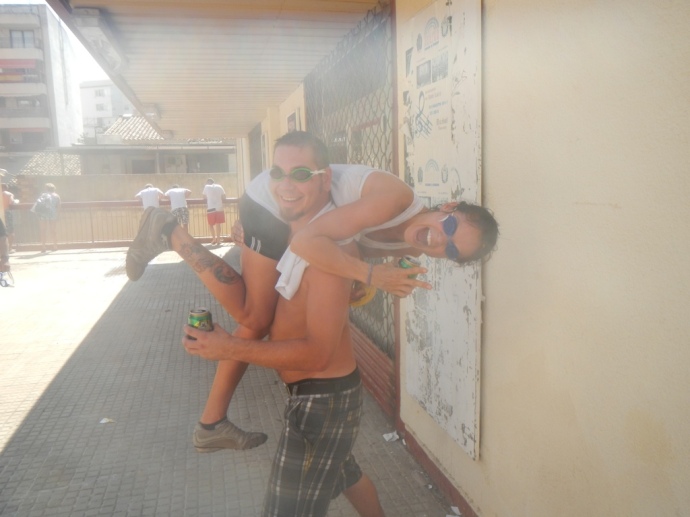 As you near the station, several of the locals bring out buckets of water and hoses to wash off all of the participants. Nice and refreshing after a day in the sun and paste everywhere. Sun dried tomatoes if you will (please snicker just a little bit here, for the jokes sake). 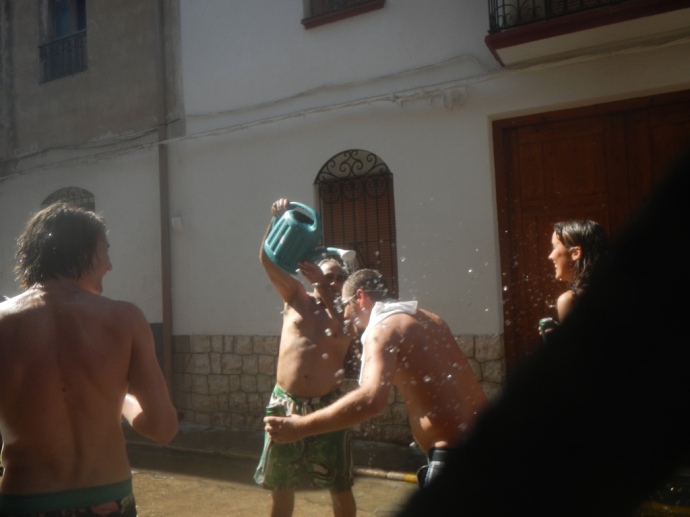 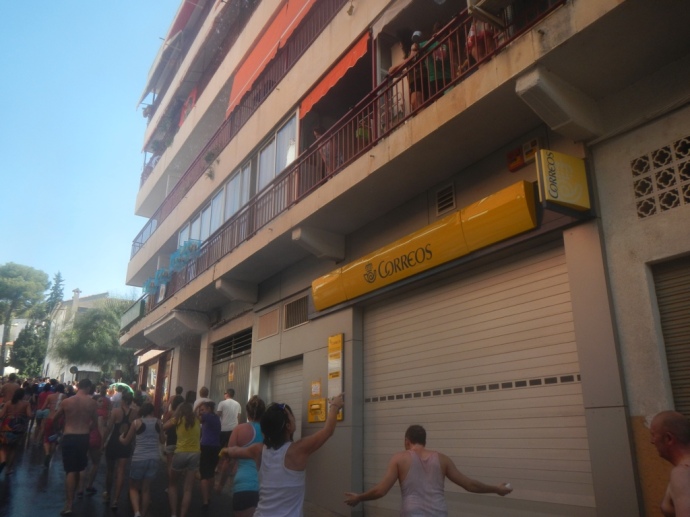 So the crowds have dispersed, the tomatoes are crusting over everything in site and we are heading back to recoup. I’ll give you one guess on what we DIDN’T have for dinner…

Scratching the surface of Madrid

I’ve been having a bit of trouble with my photo uploads (good ol’ technology) so once I get it sorted I’ll be flooding the blog with striking shots and info of what Spain so far. Here is just a taste…

I loved the color contrast between the flowers and buildings.

I wasn’t surprised to see Mickey and Minnie wandering the streets, by all means they rank in popularity up there with Coca Cola and Oprah. I did however do a double take at his choice of costume… an American Flag?

This group of people have been out here in the same spot all day, everyday since I’ve arrived. Surrounded by suitcases and umbrellas, they sit and speak amongst themselves.

If you were to close your eyes and walk past this book store, you’d hear an enthusiastic elderly man explaining something (that I couldn’t understand) to a young fellow who you wouldn’t be able to hear due to his intent on grasping every word being shared with him. It was lovely.

These statues are placed around the city, I think they’re kind of comforting in a way.

I actually think I’m going to have an entire post dedicated to the food that has left a special place in my heart(and gut). These are just the a few pics that I was able to load… Dozens more to come!

This is “Plaza Mayor”, the view from the first hostel room Madrid. I’ll be describing the different hostels I’ve experienced in Spain in the future as they range quite a bit and deserve their own post, (as well as the people I met during my stay).